For the year 2020, I proposed returning to the kind of year we had in 2015 when we spent two months in Oxford, England, visiting museums, concerts, lectures and evensongs. This year, we signed up for lectures, concerts, plays, rugby games and photo exhibitions – all of which have been canceled because of our current plague.

I all reminds me of what Daniel Defoe wrote about 1664 in “A Journal of the Plague Year:”

Thinking of their graves might have “most happily led the people to fall upon their knees, make confession of their sins, and look up to their merciful Saviour for pardon, imploring His compassion on them in surely a time of their distress.”

But no. Instead, the people turned to “extremes of folly:” conjurors, witches, mountebanks, multitudes of pills, potions, and preservatives, odious and fatal preparations, some with mercury, charms, philtres, exorcisms, amulets and certain words or figures, particularly the word Abracadabra, formed in a triangle or pyramid, thus: —

Defoe says he will not spend much time on these “follies,” but notes:

Sounds about right, and who knew Defoe was a fortune teller? This will go down much easier with a little hydroxychloroquine.

My friend Don suggested this as “an addition to your historical Daniel Defoe reporting:”

A LETTER FROM F. SCOTT FITZGERALD, QUARANTINED IN 1920 IN THE SOUTH OF FRANCE DURING THE SPANISH INFLUENZA OUTBREAK:

Dearest Rosemary, It was a limpid dreary day, hung as in a basket from a single dull star. I thank you for your letter. Outside, I perceive what may be a collection of fallen leaves tussling against a trash can. It rings like jazz to my ears. The streets are that empty. It seems as though the bulk of the city has retreated to their quarters, rightfully so. At this time, it seems very poignant to avoid all public spaces. Even the bars, as I told Hemingway, but to that, he punched me in the stomach, to which I asked if he had washed his hands. He hadn’t. He is much the denier, that one. Why, he considers the virus to be just influenza. I’m curious of his sources. The officials have alerted us to ensure we have a month’s worth of necessities. Zelda and I have stocked up on red wine, whiskey, rum, vermouth, absinthe, white wine, sherry, gin, and lord, if we need it, brandy. Please pray for us. You should see the square, oh, it is terrible. I weep for the damned eventualities this future brings. The long afternoons rolling forward slowly on the ever-slick bottomless highball. Z. says it’s no excuse to drink, but I just can’t seem to steady my hand. In the distance, from my brooding perch, the shoreline is cloaked in a dull haze where I can discern an unremitting penance that has been heading this way for a long, long while. And yet, amongst the cracked cloudline of an evening’s cast, I focus on a single strain of light, calling me forth to believe in a better morrow. Faithfully Yours, F. Scott Fitzgerald ~ 1920

This story, with some nice cheeky phrases, appeared in The Seattle Times this week about the “worried well” hitting the road to get out of the “germy epicenter of infections in Britain,” which would be London. Off the wealthy well went to the Lake District, Hebrides and Cornwall, where they thought they would be socially distanced only to find residents there very anti-social, as in “Go away” and quit bringing your disease here.

Same thing is also happening in the United States, where National Parks have been closed to keep people out. Residents in faraway places such as Methow Valley in Washington State are putting up Facebook warnings to keep your face elsewhere. The rich know the drill: Get an early warning of a pandemic, sell your stock and flee to your hidey-hole away from medical facilities, spreading the coronavirus as you go.

Nothing new here, as Daniel Defoe wrote in “A Journal of the Plague Year.” In 1664, when the plague hit England, the rich “thronged out of town.” 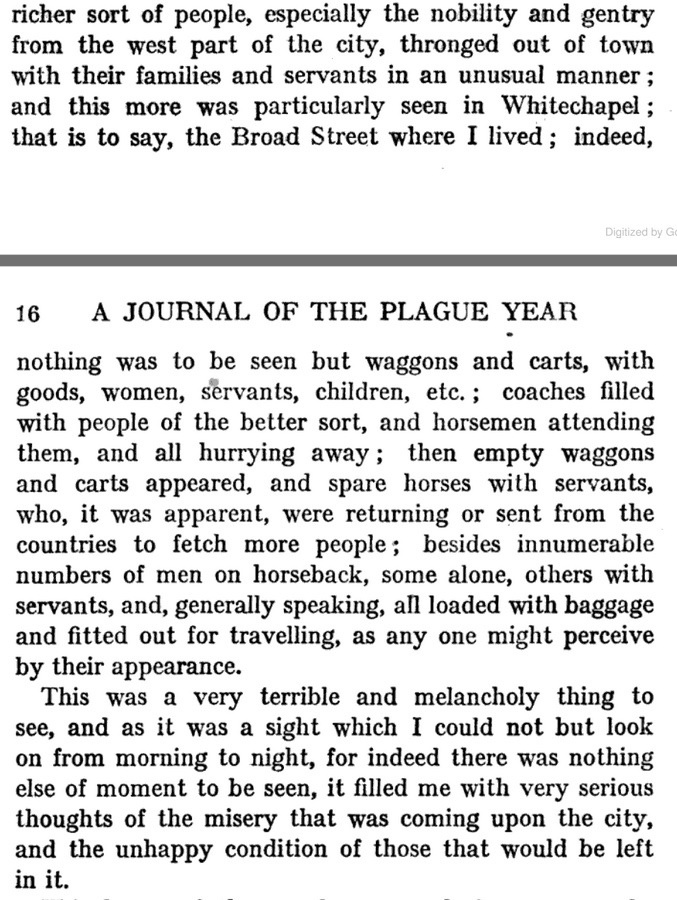 My daily check-in with TV stations to track the number of COVID-19 cases and the number of the dead reminds me of Defoe’s way of keeping track of the plague, following the parishes’ “weekly bill of mortality.”

So should Defoe’s narrator join those heading out of town? Defoe devotes many words on this decision, seeing it as directions to those who could face the same thing in the future, like in the year 2020.

He’s a saddler, single but has a house with servants, a shop, warehouse and goods. The bills of mortality are showing 700 dead a day. But to leave, he would “hazard the loss not only of my goods, and indeed of all I had in the world.”

So he should stay, right? That lasts until his older brother shows up and tells him: “Master, save thyself.” Head for the country because “the best preparation for the plague was to run away from it.”

He takes his brother’s advice until it comes into his mind that “nothing attended us without the direction or permission of Divine Power.” Surely God “was able effectually to preserve me in the midst of all the death and danger that would surround me.”

But give me a night to sleep on it, the narrator says. But mostly what he does is read the Bible, especially the 91st Psalm, verses two through seven, which ends “there shall no evil befall thee, neither shall any plague come nigh thy dwelling.”

That might be enough reason to stick around, but two events the next day made it official: The woman who was supposed to take care of his goods fell sick, and then he did, too.

But he didn’t die as there are many, many pages to go before we sleep.

Describing coronavirus as a “foreign virus” seemed odd to me when I first heard it. Viruses seemed like part of the natural world, no nationality, no ethnicity, mostly to be avoided. But foreign? Do they carry passports? Do they salute a flag of red, white and flu? Did they ask for asylum before coming to the United States? And if so, why aren’t they in Mexico waiting for their court date?

Apparently this misguided notion of how viruses get around in this world is not unique to the coronavirus and its mis-namers. Daniel Defoe starts his “A Journal of the Plague Year” noting the same ill intention.

We have to be suspicious of Defoe and how he describes the Plague of 1664. He was only 5 years old during that year. So what he remembers or how it impressed him as a child might not hold up too well to Snopes.com. Defoe’s career as an author and journalist had elements that Trump would love: His political enemies had Defoe thrown in prison for slander. On the other hand, the two men had several things in common: They both “participated in several failing businesses, facing bankruptcy and aggressive creditors.”

Defoe wrote the “A Journal of the Plague Year” 58 years after it happened. But he must have heard stories about the plague all his life, gathered information from written sources, interviewed those who survived and wrote it as a grown man walking through the streets of London observing what it must have been like. Literary journalism at its finest.

His version of the plague strikes a chord with what is going on today. Calling the pandemic a Holland plague or a China virus exposes that you are in denial that the sickness is here now and you must deal with it. You could do that. Or, you could say things like:

“It will all work out well.”

“We have it very well under control. We have very little problem in this country at this moment — five. And those people are all recuperating successfully.”

“Well, we pretty much shut it down coming in from China.”

“Looks like by April, you know, in theory, when it gets a little warmer, it miraculously goes away,”

“It’s going to disappear. One day — it’s like a miracle — it will disappear.”

Defoe records that those at the top in 1664 were slow to take action.

Once the plague started getting around, concealment of sickness became a general practice.