It was like watching a semi bearing down on you on one of England’s one-laned, unnamed roads. Like watching a big tub of lard coming down the airplane aisle, hoping he doesn’t take the seat next to you. But in this case I knew he would, his muffin top spilled onto me as he sank into the creaking seat.

Worse yet he had an iPad to shoot photos. Maybe the worst thing ever to have a camera lens attached to it. It’s like shooting pictures with a sheet of plywood. No big deal, right? He snaps a couple shots and the blackboard comes down, right? Wrong. He’s shooting video and its like being at the drive-in, the screen held out there for all of us to see what a shakey, worthless waste of space on his memory chip it is.

Only thing that would have been worse is if he put it on a selfie stick.

Meanwhile on the field, Canada let the game slip away 17-15 as the Romanian forwards took over, pushing in two tries. The Canucks kicked away too much possession and stopped going to their backs — their strong point in the first half.

An extra ticket has fallen my way from our newest set of visitors: Bruce and Becky. It seems Becky would rather hang out in Oxford with Kathy and let me go to the Canada-Romania match in Leicester with Bruce. It would be wrong for her not to get her wish.

Going through my brochures on the game venues, I find that the “if you only have time for one thing” in Leicester is the King Richard III Visitor Center. He was the last Plantagenet king of England. He lost his throne, and his life, at the 1485 Battle of Bosworth, and Henry VII took over. Richard spent the next 500 years buried under a parking lot until his remains were found there in 2012.

He has since been reburied in the Leicester Cathedral. The visitor center, opposite the cathedral, tells the story of the War of Roses, which ended at Bosworth; recreates the battle and explains the discovery of Richard’s remains and identification by DNA.

Not sure we will have time to take in all of that, but it is also Haka Day Out, where the audience is invited to learn and join in a Maori haka. 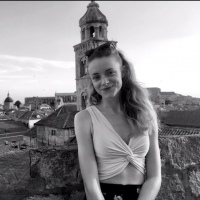