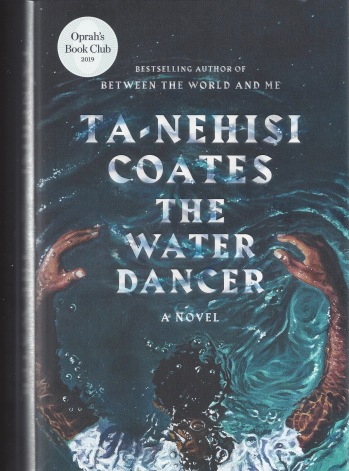 Let’s start with the complaints and then get to the good stuff. Kathy and I arrived early — or so we thought — to get into Benaroya Hall in downtown Seattle to hear Ta-Nehisi Coates speak on Sunday, Oct. 20, 2019. But we spent the hour between 7 and 8 p.m. in a line that wound around the outside of the hall, waiting to go through security.

I can’t blame Coates for asking for the extra security. In “Between the World and Me,” a book Coates wrote as a letter to his son, he said: “And you know now, if you did not before, that the police departments of your country have been endowed with the authority to destroy your body. It does not matter if the destruction is the result of an unfortunate overreaction. It does not matter if it originates in a misunderstanding. It does not matter if the destruction springs from a foolish policy. Sell cigarettes without the proper authority and your body can be destroyed. Turn into a dark stairwell and your body can be destroyed. The destroyers will rarely be held accountable. Mostly they will receive pensions. And destruction is merely the superlative form of a dominion whose prerogatives include friskings, detainings, beatings and humiliations. All of this is common to black people. And all of this is old for black people. No one is held responsible.”

There are American who don’t like to hear that. They are the ones who, as Coates says, have succumbed to the “apparatus urging us to accept American innocence at face value and not inquire too much. And it is so easy to look away, to live with the fruits of our history and to ignore the great evil done in all of our names.”

But I wish Benaroya Hall and Seattle Arts and Lectures would have planned better for getting us in out of the rain. There are five interior entries into Benaroya Hall, and the security points were set up there, wanding each member of the audience as they entered and checking through what they had emptied from their pockets and handbags. The staffers could have moved checkpoints to the row of exterior doors across the front of the building. It would have pushed the crowd out into the weather, but we were there anyway. 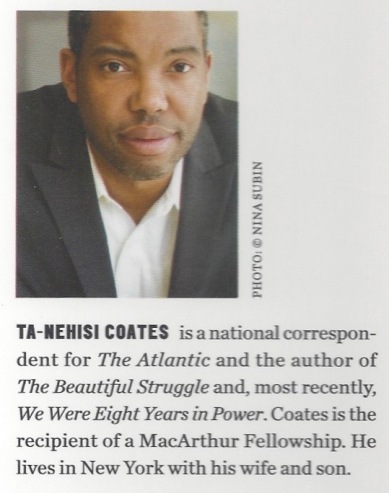 The event was supposed to start at 7:30; we weren’t led to separate seats until 8 o’clock (only singles remained). Things finally got started at 8:15 but were halted 15 minutes later to take the buzz out of the microphones. By 9:20, it was over.

They are also trying out a new technology to display on your cell phone captions on what is being said. Great idea for someone like me with hearing problems. But I could not get it to work.

Charles Johnson, professor emeritus at the University of Washington and author of 24 books, including “Middle Passage,” a National Book Award winner in 1990, interviewed Coates. Too much Johnson; not enough Coates.

And now for the good. Our ticket included a copy of Coates’ new book, “The Water Dancer,” and I can’t wait to start reading it. It’s Coates’ fourth book and his first venture into fiction, about Hiram, born into slavery, fathered by the plantation owner who sells the mother when Hiram is still a child. He can’t remember his mother, but he is endowed with magical powers. That’s how it starts, and Coates said: “At the end, there is still slavery.”

He spent 10 years writing it and doing research, reading slave narratives, going to Civil War battlefields and plantations. He said his book agent got him interested in writing fiction, but Coates had other reasons.

“After the Bible, the second biggest seller of fiction is ‘Gone with the Wind,'” he said. Why is there such a romantic view of Civil War participants? Why is Robert E. Lee always gallant and heroic in his struggle to maintain slavery?

So there is a need for “inversion,” some way of creating another kind of hero. That could be putting a black man on a horse and giving him a gun, which sounded a lot like the movie “Django Unchained.” Taking the white man’s image and painting it black.

It sounds to me like Coates wanted to make the slave the hero, in a more quiet way than Jamie Foxx blazing away with a six-shooter. When I read the book, I’ll be interested in seeing if he did that.

Coates also touched on teaching writing: “Think of the writer as the forest ranger. People come to be guided through the national park. They don’t want the ranger to get lost.”

On Trump: “I wrote a column when he was elected, and anything I said now would be redundant.”

And about reconstructing the understanding of race in America: “Listen as much as I can and talk as little as I can.”

Wish he had been given a chance to say more last night.

P.S. Got this as an email today: “We’re so grateful you could join us for an evening with Ta-Nehisi Coates. We are dedicated to producing the best events possible, and we know that last night both the long security lines and delayed start were enormously frustrating. We are currently working with the venue to ensure these issues do not happen again.

“We are so sorry for the frustrations you experienced. I want you to know that we learn from each and every event and mistake, and I promise you that we will strive to make future events better.”

No need for a refund, but I hope they get things straight by our next event.